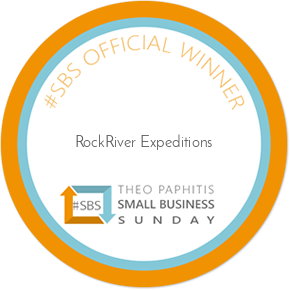 Just over two weeks ago we were really excited to be planning our first Facebook Live.  Michael wasn’t long back from climbing Mt Elbrus in Russia and while he had been away I had collated questions on the Facebook and Instagram pages from followers who wanted to know more about life at altitude, his thought process on the hill, acclimatisation and so on.  We started at 8pm Monday 11th September and the nervous energy soon disappeared as he got into his stride talking about the trip and answering the questions.

I was distracted though.  My phone and Ipad were next to the laptop because I wasn’t sure how the FB Live worked and I thought I might need them to see live questions, and Michael’s phone was in the next room.  My two were lighting up with notification after notification, while Michael’s was almost playing a tune with the number of alerts coming through.  And then I remembered – #SBS winners are announced at 8pm on a Monday night.  I took a quick look…what was going on?  And then I saw it…

Theo Paphitis invites small businesses to tweet their strapline on a Sunday evening, then he chooses his favourites and sends out a congratulatory tweet to his 505k followers who are encouraged to retweet it.  With 40,000 entries each year, we were incredibly excited to be picked and since the win we’ve seen increased activity on all of our social media platforms, and more traffic to our website which is all fantastic.  We are now part of a club of winners who are incredibly supportive and generous with their advice – it’s a great network to be in.

We were so excited that we followed up the win with a press release to The Pocklington Post, our local newspaper.  We’re clearly on a roll because they ran the story.  Michael is now an official page 3 pin up! 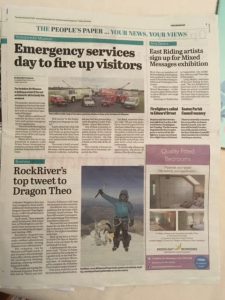 “RockRiver also runs expeditions for the Duke of Edinburgh Award scheme.  The firm will oversee 73 young people undertaking their bronze expeditions this year”

We love this part – we’ve already had two schools and a youth group get in touch to discuss running their DofE expeditions for them next year since this coverage.

RockRiver Expeditions has taken us from dreaming about running our own business to actually having the Adventure that is running it.  Let us help you move from dreamer to Adventurer too.  Join us on a guided walk, learn new navigation skills, take your climbing to the next level – let us know what you want to do and we will do our best to help you Make your Adventure Happen.

You can read the full Pocklington Post article HERE