At a quarter past midnight the alarm clock went off.  I’m not sure I had really slept. I must have dozed off around 8:30pm listening to my iPod and feeling the gentle rocking of the Barrel in the wind. The team got up and slowly started to pull their kit and clothes together.  Breakfast was at 1am and the snowcat left at 2am and I (we) needed to be on it.

Outside I could hear the wind blowing and I thought to myself that this was going to be an interesting jaunt up the hill. I pulled on my thermals, fleece trousers and top, laced up my B3 boots, grabbed a down jacket and headed to the loo.  It was surprisingly calm outside. The ground was firm from the cold air and the moon was lighting up the mountainside.  There wasn’t a cloud in sight.  I had one thought, “This could be a good day for a summit attempt”.

Once back in the Barrel I prepared my bag.  Simple first aid kit, food for the day, water, flask to be filled, goggles, cat4 sunglasses, spare gloves, spare hat, ice axe – I would be wearing everything else. We headed in to a breakfast of porridge, sausage and bread.  Have you ever tried to eat a full breakfast at 1am when you’re not hungry? Forcing the sustenance down knowing I was going to need the fuel, I slowly made my way through breakfast.  I filled my flask and made a sandwich from the worlds driest bread, with salami and cheese ready for later.

Heading back to the Barrel it was time to get geared up.  Gaiters on, followed by overtrousers. Then the top – it was going to be cold up there – soft shell, goretex jacket and primaloft jacket for insulation.  The Barrel was starting to warm up! I put my harness on and it was time to head outside.  Grabbing the rucksack, poles and crampons I headed out in to the cold of the night for final preparation. Once outside I put my crampons on, adjusted the poles to the right length and awaited the rest of the teams arrival. Once together we all headed down to the snowcat to start our journey up the hill.

Setting off for Elbrus

Our team was sharing the snowcat with another team in order to cut down costs, which are around 600 Euros. The snowcat took us to the top of the Pastukov Rocks, the height we had been to on one of our acclimatisation treks.  From there we began our true assault of the mountain.

The journey up the hill in the snowcat was interesting and uncomfortable.  For around 30 minutes everybody was slowly being squashed against each other as we climbed the hill at what felt like a constant 30 degree slope.  By the time we arrived at the top I had lost all feeling in my right leg.  I was also super desperate for a pee as all the constant movement from the snowcat hadn’t done my bladder any good.

The hike to the summit

Finally we were good to go.  Sasha, our Russian guide started to work his way up the slope and we followed on like ducklings following their mother. We zig zagged our way slowly up the hillside taking small, slow, methodical steps.  When we turned to the left we endured graupel from the previous storm being whipped into our faces.  It was a relief when we turned back to the right again and had the wind on our backs.

Slowly we progressed up the hillside, then out of the blue we came across a buried snowcat which had broken down and been left for dead on the mountain. I had heard about the snowcat.  It meant we still had at least 30 minutes more climbing before reaching the start of the traverse which would take us round the base of the east peak and into the saddle of the hill. 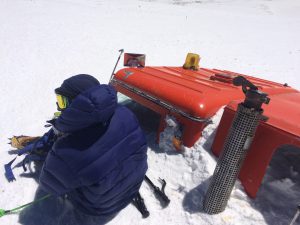 The buried snowcat. This landmark means another 30 minutes trek to the start of the traverse

Eventually we reached the start of the traverse.  The worst of the steep climb was now behind us and we began the gentle rising traverse of the hill.  At this point dawn was beginning to break as the sun started to rise in the east.  Goggles were now on.  While it wasn’t that bright we were walking directly into the wind with graupel constantly being picked up off the hillside and blasted into our faces. As the sun rose the mountain cast its’ own shadow into dawns early light giving rise to a spectacular view across the sky.

All the time we were climbing higher I was becoming more aware that soon I would break my previous height record of 5,200m which I had achieved on Cho Oyu before the Nepalese earthquake brought an end to that expedition in April 2015.

The sun was slowly starting to creep down the hillside, and before long it was on our backs and began to warm our bodies from the night cold. The traverse seemed to level out and we began to see teams gathering in the saddle, having a break and preparing themselves for the final push to the summit.

As we arrived at the saddle we could truly appreciate the next phase, the final steep push towards the summit plateau and the fixed lines that awaited us. But first it was time for some fuel.  “It must be lunchtime as I am really hungry” I thought.  I grabbed the sandwich which had been hastily made at 1am that morning and looked at my watch.  It was only 8:30am!  So far the climb was going well.

The final push to the summit of Elbrus

The start of the next phase saw us climb steeply to the fixed lines where we connected our lanyard to the rope.  This was just in case we fell and it would prevent us from sliding into the rock field below. As we approached the top of the lines a group was coming back down after achieving the summit.  “In around 10 minutes”, I thought to myself “that will be my turn, my turn to stand on the top of Europe”.

The final 100m was along the gently rising summit plateau.  I walked towards the summit which rises a few meters above the plateau. As I got near I was surprised that I started to feel emotional and discovered I had a lump in my throat.  All the emotions of not getting the chance to finish Cho Oyu came flooding back.  Here I was about to stand on the highest mountain in Europe, one of the seven summits.  Me, a 45 year old bloke from Fenland, the flatest area in England.  Finally I had made it.  I am a high altitude mountaineer. 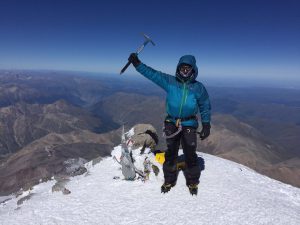 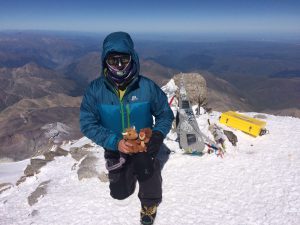 We enjoyed around fifteen minutes on the summit taking photographs and congratulating each other on getting to the top.  But as most folk know we were only halfway there. Next we had to start our descent back down the way we came, only this time we were beginning to feel the effects of the climb up, with our legs starting to get tired. We made our way back down the hillside towards the saddle and round the traverse to the start of the steep slope descent which would take us to where the snowcat dropped us off.

From here, tiredness forced two members of the team to pay for a skidoo down the hill.  The rest of the team cracked on with the last 1,000m of descent which took us back to the Barrels and a bowl of well earned soup from our cook.

We finished our meal and began preparations to leave camp and head back down the mountain to Cherget. The chairlift was still not working so once again we climbed into the back of the truck and were driven down to the top of the gondola station where we began to unload all of our kit. At the bottom of the gondola our vehicle was waiting to transport us back to our hotel.  There, we showered and enjoyed an ‘Elbrus 5642’ beer in celebration of our success.  The following day we would begin our journey back to the UK.

The journey to the airport was quite different to the one that brought us to the mountain. The heavy rain and storms of the previous week had caused a high mountain lake to breach its natural dam.  This caused a devastating flood further down the valley. The flood water had completely washed away the only road in and out.  So no vehicles could get up or down the valley. The only way in or out now was via helicopter!

An early morning flight out was arranged for us so that we could get to the airport on time. As we waited our turn a classic looking Soviet era helicopter thumped its way up low over the valley floor. The anticipation of flying in this old aircraft was cool if a little daunting.  We all headed aboard, took our seats and we were off. I remember thinking how clear the window was, then realised there was in fact no window! The flight lasted around 20 minutes taking us out of the valley.  Then we landed and met our driver to transport us to the airport for our flight home. 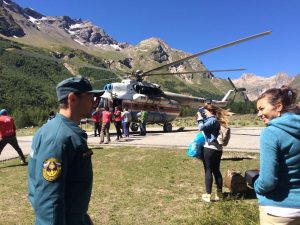 In climbing the mountain I gave myself some closure about not being able to attempt my Cho Oyu ascent back in 2015.  And I felt immensely proud about what I had achieved. However there remains a constant draw to the high hills of the Himalaya, and the need to climb above 8000m.  That’ll be another story…