Seventeen years ago, whilst on holiday in Kenya – a younger, slimmer version of me decided to do the Yorkshire Three Peaks. Not having grown up in an outdoorsy family meant that I had come very late to hiking, but having enjoyed it for a few years I was up for the 24 mile/12 hour challenge.

From memory it seems that my husband Andy and I soon assembled a crew of 9, selected a date (Saturday July 3rd 2000 weirdly time-stamped in my memory), got some new Berghaus boots, wore them in, booked a B&B and did a few practise walks involving actual contour lines. Living in the flatlands of the Lincolnshire Fens meant that this was ESSENTIAL – and something the older 2017 me should have remembered. Then off we went. … one dropped out on the first Peak due to injury, (expected), one had a boot problem and one accidentally fell in a muddy area on the way down from Pen-y-ghent and looked like he had been swamp diving (both unexpected). But 8 of us did it, and did it well….we separated out a bit towards the end, but I distinctly remember insisting that my team of 3 actually ran the last half a mile so we would beat not just 12 hours but 11 (10.47 actually – the celebratory Y3P mug still lives in my kitchen!).

Eleven years on at Samoens in France we met the lovely Paula and Mike – later to be RockRiver Expeditions. A few years after that we (well, actually I ) decided we NEEDED to do the Y3P again to prove that we still could. Maybe it was something to with the passage of time or a need to prove I was still fit enough. Perhaps it was also a desire to beat the 10.47 time despite the increased years, or an awareness that we had been doing less hiking in Yorkshire – and more in Norfolk (closer to home but still distinctly lacking in hills). It was definitely the chance to spend time with Paula and Mike, and to have expert guidance on a hike, maybe learning some new things or hiking tricks of the trade too. I am not just saying this because I am guest blogger on their page, but I would definitely say that having an expert guide and back up were priceless and we could not have completed it without them. This however, represents the solitary good bit of our Y3P planning, what follows next will never be used as a “how to” guide………

Having enlisted two friends and booked both RockRiver Expeditions and a place to stay, we made plans. Obviously, as everyone knows, merely the act of making plans is not sufficient by itself, you do unsurprisingly have to action them. Unfortunately due to other circumstances and life it did not quite happen like that – basically due to a new job, steep learning curve, issues on our farm and injuries we did not have the chance to practise much. Then one of our friends unexpectedly had a serious medical issue and so they both pulled out leaving just the two of us. I convinced myself that the lack of hill training, being older and a bit heavier would be offset by the fact I go running and recently ran a 12 miler with a friend training for the marathon…….easily yes? Well ummm, NO!

As if the omens were not bad enough, in April walking a 15 miler from my home, the sole fell off my Asolo boots. Recognising that my Salomons are just too small for hill descents (I value my toes too much!) and with no time to buy a new pair and break them in, I sent the Asolos to be resoled, praying they would be back in time – the last time I sent some they were back in 3 days….this time they weren’t, in fact they enjoyed a month’s holiday in Lancashire. 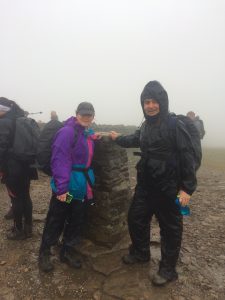 If 2000’s Y3P had perfect hiking conditions, 2017’s were payback time. It started raining on the ascent of Pen-y-ghent, sufficient to mean full on waterproofs were required. My old, out of retirement, Berghaus boots were not as waterproof as they could be….by a long way. Visibility was low and strop levels (mine) were high.

But we did it, met Paula in the back up van, changed socks and trousers (yes, it was that bad) and went on our way. I was pleased to note that Andy was struggling as much as me up Whernside, and Ingleborough was harder still.

Fortunately, thanks to Michael’s unflappableness and Paula’s back up we made it, but we were outside of the 12 hours (well not in actual time spent walking but time taken overall).

That said, despite everything (even a text from work telling me that my boots had arrived back from being repaired), it was an amazing day, we enjoyed it and learnt loads – here’s a sample selection:

And most importantly, PROPERLY PLAN AND PREPARE……which we will do for next time because, obviously, we have unfinished business with the Y3P – see you next time RockRiver! 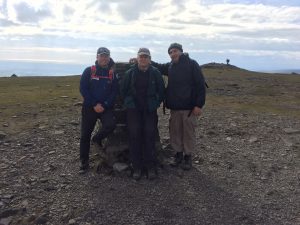 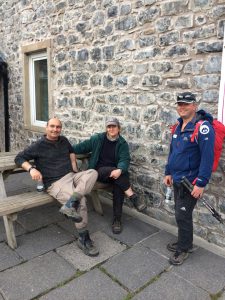