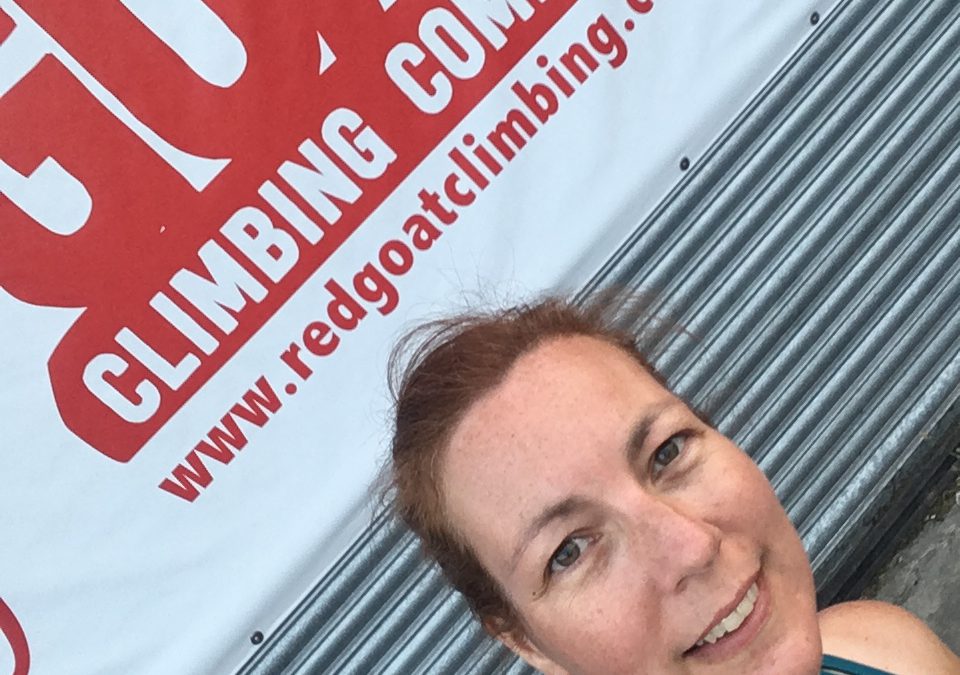 I’ve not been climbing for over a year.  Heck, I’ve not done any upper body strength work for months.  But when I saw that there was going to be a bit of a meet up at Red Goat Climbing in York, I thought “Why not?  It could be a fun evening”.  This is the story of what happened, and the lessons I learnt during the evening.

I learnt to climb 18 years ago at the Barbican climbing wall in York which sadly no longer exists.  Since then my relationship with climbing has been on/off.  Mainly because my climbing partner (my husband Michael) isn’t always around to climb with me!  I once tried a social climbing night at a local wall, but I was the only one to turn up and I had to climb with an instructor.  After an hour and a half with no breaks my arms were ready to fall off!

There are key differences between rock climbing and bouldering.  Essentially they both require you to move on rock (or indoor fake rock), but rock climbing takes you higher, you usually wear a harness, use a rope and need a climbing partner.  If you fall, the rope, harness and climbing partner on the other end catch you.  You bounce a little in the air and maybe swing around a bit but then you get your breath back, grab onto the rock and off you go again.  When you get to the top you can be gently lowered down to the ground with the rope.

With bouldering there is no rope or harness.  Just you and the hand and foot holds.  The routes tend to finish lower than rock climbing routes, and you need to down climb after you get to the top, perhaps jumping the last little distance down to the mat.

I met Megan and in we went.  There was a friendly welcome and the form filling process was easy (you can even fill it in online before you turn up if you like).  We were given an overview of the rules and were shown the layout of the routes.  Then it was over to us.

When I’ve tried any bouldering before it’s been in cave shaped indoor walls where a lot of the routes require you to hang virtually upside down and contort yourself all over the place.  With my arms not being worked out very often, this is very tiring, frustrating and as a result it doesn’t last long.  Yellow holds were where we needed to start apparently (they’re the easy routes) and I was pleased to see there were a number of reasonably vertical yellow routes.  In fact the whole building was more ‘upright’ and like a short regular climbing wall than the cave style I had seen elsewhere, what a relief!  It was busy but we didn’t have to wait to get on, there was always something available to try. 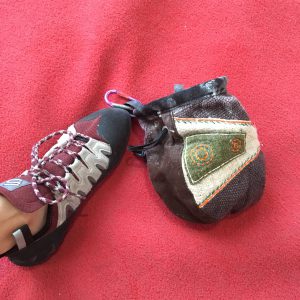 Wow it feels high when you’re up there without a harness and rope!  Neither of us got to the top the first time, but after a quick chat about confidence we tried again – we both did it!

I realised that when I usually climb I rely on my climbing partner for more than just basic safety.  I want them to hold the rope reasonably tight so that I feel ‘held’ in my harness.  Whereas most people have a little bit of give in the rope so they can move easily.  This is possibly why I’m uncomfortable climbing with anyone other than Michael.  The experience of bouldering will hopefully translate to my climbing and make me feel less reliant on the rope, trust myself more, and make it easier for me to accept different people belaying me.  Which in turn means I’ll be able to climb more often because there will be a whole load of climbing partners to choose from!

Lesson number 2 – Be confident in your moves

The second route had a funny old move in it.  I went to grab it, but ended up scuffling my way up the wall to get there.  It was fine and I did it successfully but it wasn’t pretty.  And I realised that because I rely on the rope to catch me when I’m climbing, my technique is suffering.  Without a rope I need to be more definite when I make a move.  Confident that I will get there.

The third route had a stretchy move on it near the top.  Just before the move I had a split second of a wobble but I remembered what I’d just learnt.  If I didn’t commit to it I would fail.  So I went for it and it was all good!  Be confident.

Lesson number 3 – You have to push yourself to grow

After a few more routes Megan and I had a break and watched the others climbing – it can look so balletic when people have mastered the moves.  And the strength in some of them, wow!  More motivation to get stronger!

Then Emily arrived.  She had instigated the whole evening up but had unfortunately been held up with work.  Emily has clearly done a lot more bouldering than either Megan or I and she whizzed up each route making them look easy.

But what she also did was pick out the yellow routes that had overhangs, not the comfortable vertical ones we had been doing.  They were harder, they took more out of the arms and we didn’t get to the top of all of them.  I fell off one when I was halfway up (luckily it was a reasonably graceful fall and I didn’t hurt myself) but I was trying different moves and pushing myself harder than I had done earlier in the evening.  And I was getting up routes that I had previously written off.  She pushed us and it made me better, and more determined to go back and finish off the ones that were still out of reach.

So, three lessons that are as much about life as they are about climbing and bouldering;

With tired arms I headed home but not before we got a picture of the three of us on the wall.  And we might just have made plans to meet up and do it all again.  After all, we didn’t even try out the cafe and the cakes did look good.

If you’re tempted to give climbing a go, RockRiver Expeditions runs a number of outdoor climbing days that can be taken as a single day or multiple days.  Introduction to Climbing, Introductory Rock, Learn to Lead and Multi Pitch Climbing.  More details can be found here, or give us a call to discuss. 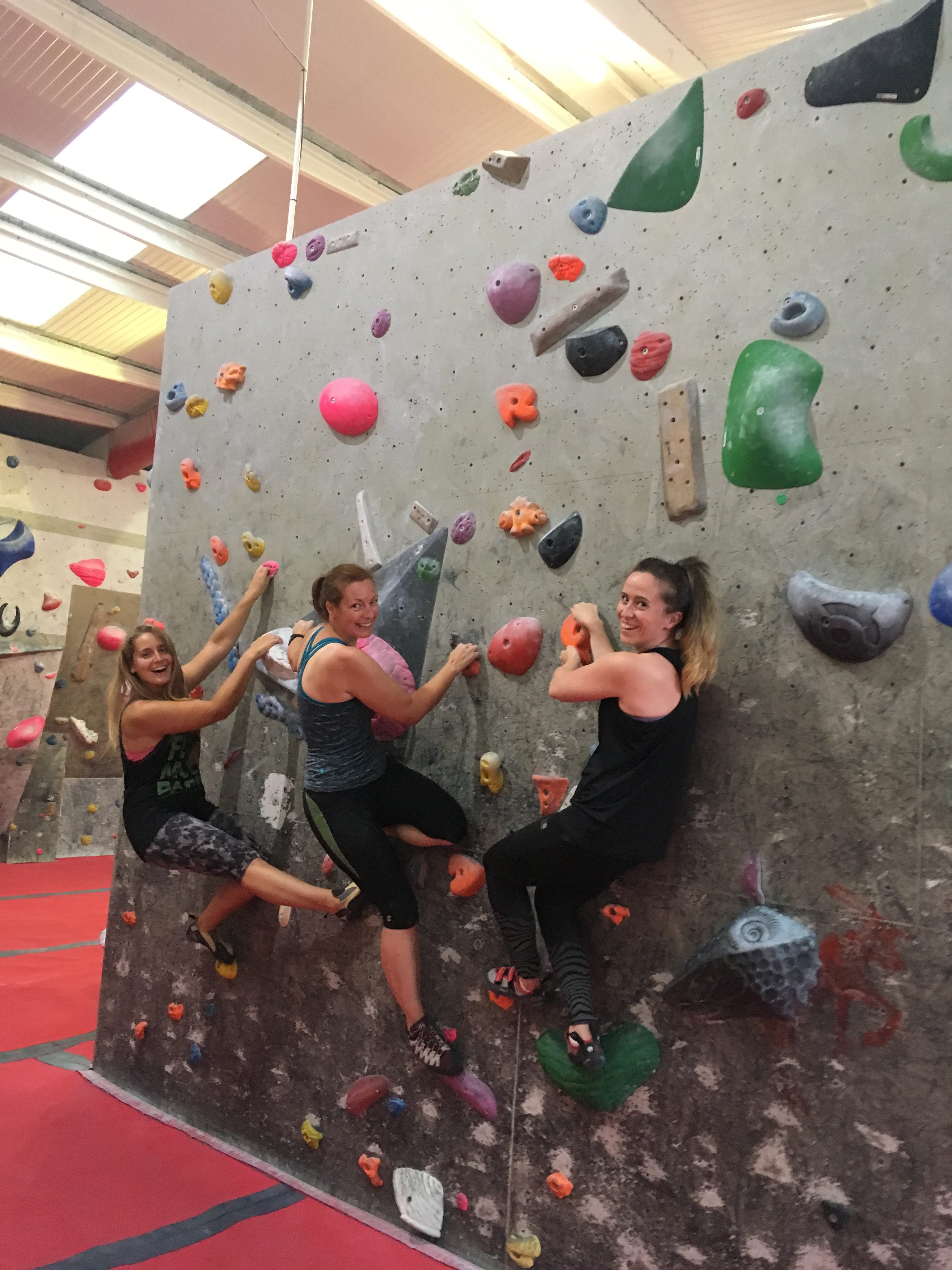